Battleship North Carolina Wilmington Riverwalk and USS North Caroline/ Battleship Road Northeast, Wilmington, North Carolina, United States/Moored in quiet dignity and majesty the Battleship NORTH CAROLINA, across the river from downtown Wilmington, beckons visitors to walk her decks. Envision the daily life and fierce combat her crew faced in the Pacific Theatre during World War II.From all across our Nation they came, young men who had grown up in the crucible of the Great Depression and now determined to serve their Country in its time of need. These are the men whose stories you will encounter through their oral histories, photographs, and mementos as you experience the Ship and the exhibits.Step back in time and let history come alive through the crews’ stories. Discover and build your personal connection by steering the ship, starting her engines or even firing the guns. The Battleship NORTH CAROLINA It's Your Experience.When the keel of NORTH CAROLINA was laid in October of 1937 at the New York Navy Yard, Brooklyn, New York, she was the first battleship to be constructed in sixteen years. She became the first of ten fast battleships to join American fleet in World War II. NORTH CAROLINA (BB 55) and her sister ship, WASHINGTON (BB 56), comprised the NORTH CAROLINA Class. Following them were the SOUTH DAKOTA Class – SOUTH DAKOTA (BB 57), INDIANA (BB 58), MASSACHUSETTS (BB 59), and ALABAMA (BB 60) – and the IOWA Class - IOWA (BB 61), NEW JERSEY (BB 62), MISSOURI (BB 63), and WISCONSIN (BB 64).At the time of her commissioning on 9 April 1941, she was considered the world’s greatest sea weapon. Armed with nine 16-inch/45 caliber guns in three turrets and twenty 5-inch/38 caliber guns in ten twin mounts, NORTH CAROLINA proved a formidable weapons platform. Her wartime complement consisted of 144 commissioned officers and 2,195 enlisted men, including about 100 Marines.During World War II, NORTH CAROLINA participated in every major naval offensive in the Pacific area of operations and earned 15 battle stars. In the Battle of the Eastern Solomon’s in August of 1942, the Battleship’s anti-aircraft barrage helped save the carrier ENTERPRISE, thereby establishing the primary role of the fast battleship as protector of aircraft carriers. One of her Kingfisher pilots performed heroically during the strike on Truk when he rescued ten downed Navy aviators on 30 April 1944. In all, NORTH CAROLINA carried out nine shore bombardments, sank an enemy troopship, destroyed at least 24 enemy aircraft, and assisted in shooting down many more. Her anti-aircraft guns helped halt or frustrate scores of attacks on aircraft carriers. She steamed over 300,000 miles. Although Japanese radio announcements claimed six times that NORTH CAROLINA had been sunk, she survived many close calls and near misses with one hit when a Japanese torpedo slammed into the Battleship’s hull on 15 September 1942. A quick response on the part of the crew allowed the mighty ship to keep up with the fleet. By war’s end, the Ship lost only ten men in action and had 67 wounded. www.battleshipnc.com Aerial video down the Cape Fear River to Wilmington, NC and the USS North Carolina battleship. Follow us below! twitter.com/swoopaerial Music: Miqz - Desolate Miqz' channel: miqzofficial 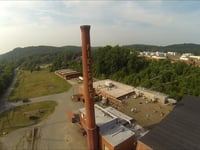 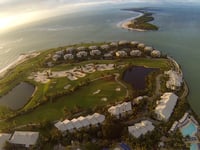 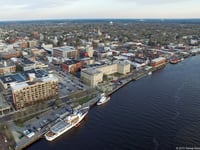