Deadvlei Aerial Video Namibia by Drone -Dead Vlei, Hardap, Namibia/November 2015 we made our second trip to Namibia and brought along a drone to capture the spectacular sight of the Dunes of the Namib Desert. The evening we spent in Deadvlei after it was empty except for us, 1 other photographer and his assistant and 2 tourists from Germany left us to experience the eerieness of Deadvlei all to ourselves. The sheer size of the vlei is mindboggling. To give some proportion, Big Daddy - the largest dune at the end of the vlei, is nearly 1,250 feet (380 meters) tall. All video was flown on a DJI Inspire 1, recorded in 4K at 30fps. Sossusvlei is a wide, flat, salt-covered expanse with a dense and compact layer of clay in the subsoil. When dry, Sossusvlei is hard and arid, and when wet, as it gets every 5-10 years when fed by the Tsauchab River, it becomes sticky and plastic. The area is the river's final destination. Even in the wettest of years, the water soaks into the salt/clay pan, giving the area its nickname: "place of no return." Altogether the blue sky, red dunes, and white pans make a striking vision, reminiscent of movies such as "The Fall," "The Cell," and "Steel Dawn." Nearby is yet another "place of no return" this one even older, and much more dead than Sossusvlei. Known as Dead Vlei or "dead marsh" (Vlei being Afrikaans for a type of marsh), it is found among the tallest dunes in the world -- some reach 1,312 feet high, which is almost as lofty as the Empire State Building. Dead Vlei was once like Sossusvlei, with the river draining into it nourishing desert life and even trees. But no longer. Some 900 years ago the climate dried up, and dunes cut off Dead Vlei from the river. It became too dry in Dead Vlei for the trees to even decompose. They simply scorched black in the sun, monuments to their own destruction. The trees, now over 1000 years old, form a barren forest. The area, however, is not entirely without life. Salsola shrubs and clumps of Nara melon stay alive by subsisting off of morning mists. It is a 44-mile drive from the park gates to the dunes of Sossusvlei and Dead Vlei. One of the many reasons to go is to experience the sunrise (or sunset) over the huge red sand dunes of the Namib desert. The skies are among the clearest on the planet. www.atlasobscura.com 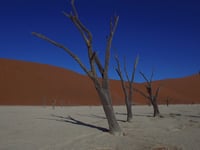 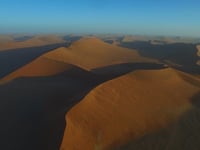 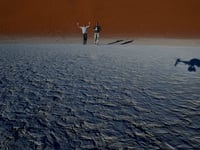