Fredensborg Palace Fredensborg Palace - Summer Residence of the Queen of Denmark - Drone 4K/Slottet, Fredensborg, Denmark/The Queen and Prince Consort live at the Fredensborg Palace for extended periods of time. And in 2004, the Crown Prince couple took permanent residence in the Chancellery House. However now they live at Amalienborg Palace in Copenhagen.The beautiful Baroque-style palace is often the setting for important events in the lives of the Royal Family, such as weddings, anniversaries, and birthdays, and the Queen also receives Heads of State from all over the world at Fredensborg.The Palace is open to the public in July/August, on guided toursThe Palace Gardens are among the largest historical gardens in the country. A typically French Baroque element are the long broad avenues of trees radiating in a star shape from the centre of the palace.The part of the garden nearest the palace, the Reserved Garden, is the Royal Family's private area. However, in July, the Reserved Garden, as well as the Palace itself, the Vegetable Garden, and the Orangery are open to the public.Free admission to the Palace Garden all year round. Services are frequently held in the Chapel on Sundays and holidays.www.visitcopenhagen.com/ The peace accord ending hostilities between Sweden and Denmark was signed while the place was being built. The castle was extended and improved during the 18th century by the Danish architect Nicolai Eigtved, who also was responsible for a large part of inner Copenhagen.The castle has frequently been used as the setting for important events in the life of the Danish Royal Family – wedding receptions, silver wedding anniversaries and birthday parties. State leaders from around the world have been received in the castle during official state visits, and foreign ambassadors submit their official credentials to the Danish Queen at the castle. It has been a long held tradition for visiting state leaders to inscribe their names in one of the windows of the castle using a diamond pen. The royal private garden, the Orangey and herb garden are located adjacent to the castle. They are open for the public in July, as are parts of the castle and the chapel. The surrounding castle gardens are open to the public all year around and admission is free. 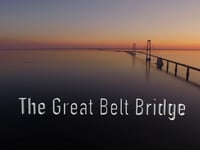 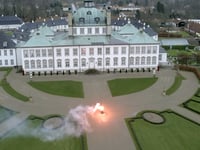 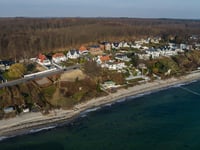 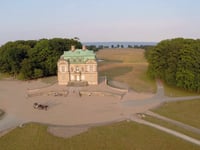