Palatul Cultural Iasi. Cultural Palace Iasi.Piața Palat, Iași, Iași County, Romania AT PRESENT, THE PALACE OF CULTURE IS CLOSED FOR RESTORATION WITHIN THE GOVERNMETNAL PROGRAMME FOR THE REHABILITATION OF HISTORICAL MONUMENTS. WE INVITE THE VISITORS TO THE OTHER MUSEUMS OF "MOLDOVA" NATIONAL MUSEUM COMPLEX STILL OPEN: THE MUSEUM OF THE UNION, AT 14, LAPUSNEANU STREET, "MIHAIL KOGALNICEANU" MEMORIAL MUSEUM AT 11, MIHAIL KOGALNICEANU STREET AND "PONI-CERNATESCU" MEMORIAL MUSEUM AT 7B, MIHAIL KOGALNICEANU STREET, IN IASI, AS WELL AS "AL.I. CUZA" PALACE OF RUGINOASA AND THE VINE AND WINE MUSEUM IN HARLAU, AT 7, LOGOFAT TAUTU STREET. THE ARCHAEOLOGICAL SITE MUSEUM IN CUCUTENI IS SUBJECT TO A PROGRAM OF RESTRUCTURING OF THE PERMANENT EXHIBITION. The Palace of Culture, acknowledged as effigy of the city of Iasi, was built in the neogothic style and as such was one of the last expressions of Romanticism in the official architecture.Although it was not raised on top of ancient foundations, as people thought at the beginning of the 20th century, the Palace was partly built on top of the ruins of the mediaeval princely courts, mentioned in a document of 1434, and partly on top of the foundations of the former (neoclassical) palace, dated to the time of Prince Alexandru Moruzi (1806-1812), rebuilt by Prince Mihail Sturza (1841-1843) and finally demolished in 1904. It was from this latter building that the Palace inherited the legend of the 365 rooms, as many as the days within one year. The edifice was built between 1906 and 1925, and is the most outstanding work of Romanian architect I.D. Berindei, who was trained at the Parisian School. Decoratively, the central hall shows a figurative mosaic including various representations of a gothic bestiarum, concentrically arranged: two-headed eagles, dragons, griffons, lions. The hall is superposed by a glass ceiling room, where initially a greenhouse was arranged. In spite of its archaic-looking design, the Palace was designed so to integrate modern materials and technologies. Thus, the stone blocks were replaced with light and much cheaper materials. Besides, some rooms were decorated using a special material licensed by Henri Coanda, under the name of bois-ciment and imitating the oak wood. Decorative ironmongery elements are also remarkable and they can be admired for instance on the doors of the Voivodes’ Hall. The building was also equipped with high-tech facilities for those times, such as electric lighting, (pneumatic) heating, ventilation system, thermostat, vacuum cleaners, which were all directed from the machinery room, at the underground level. 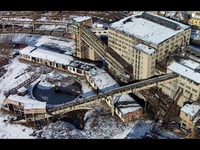 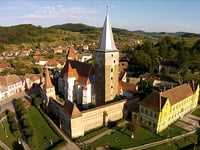 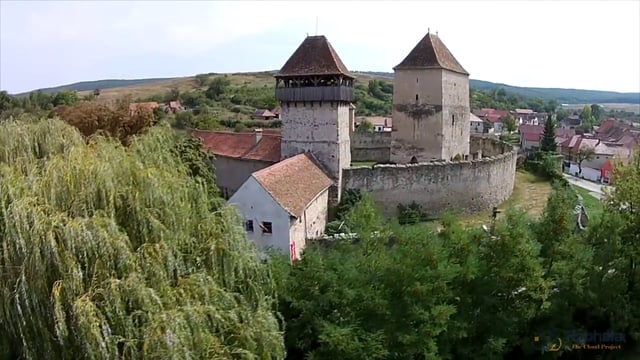 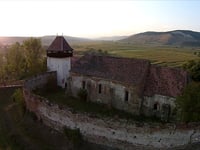 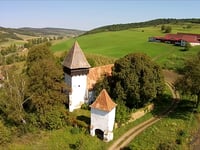 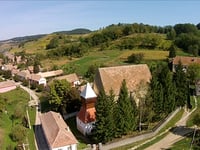 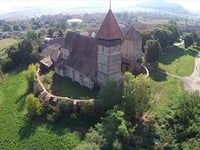 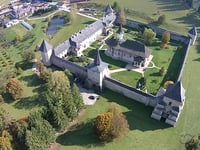