St Ninians Isle Video St Ninian's Tombolo, Shetland/St Ninians Isle, Shetland Islands, United Kingdom/Situated near the village of Bigton in Shetland's South Mainland is the largest active tombolo in the UK and one of the finest examples of this type of coastal feature in Europe. Stretching 500m from the Mainland to St Ninian's Isle this beautiful beach forms the shore of St Ninian's Bay to the south and Bigton Wick to the north. The fine golden sands and sheltered waters make it a popular spot in summer and winter alike, a "must see" for visitors to the islands.Although technically a peninsular, St Ninian's Isle becomes a true island in the winter months when high tides and strong winds breach the tombolo. The isle is famous for the treasure - mostly silver bowls, jewellery and other artefacts - discovered under the church floor by a local schoolboy in 1958. Believed to date from around 800 AD the treasure is now displayed in the Museum of Scotland in Edinburgh, with replica pieces on display in the Shetland Museum, Lerwick.Filmed, edited and produced by Rory Gillies. Music is "Shower Scene" by Josh Woodward, released under a Creative Commons license. CC 2015 The Shetland Flyer. 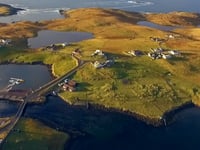 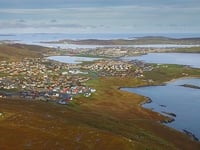 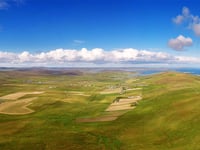 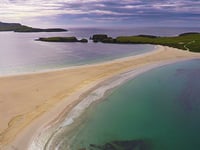