Tsaritsino park aerial - Парк Царицыно с квадрокоптераTsaritsyno, Moscow, Russia/Tsaritsyno Park and Estate is located in Moscow district with the same name. While I can’t say much about that neighborhood, the park itself is a real beauty with a rich historic legacy.Apart from the stunning views of beautiful landscapes and ponds, Tsaritsyno Park is also known for its palaces. Get ready to listen, because this story well illustrates something you guys call „the mysterious Russian soul”. :) If that’s too boring for you – scroll below to read about how and when you can visit the park.The place begins its history right from the 16th century. It wasn’t built up, basically empty. In 17th century, it changed its name to beautiful „Chernaya Griaz” – „Black Mud”. Poetic, isn’t it?The place then changed several owners until in the 18th century, Peter the Great grants this territory to Moldavian Prince Dimitrie Cantemir who was back then a Russian ally. It was he who built the first palace there and set up a beautiful park with orchards and alleys.It seems that Cantemir was a good designer because in 1775, Catherine the Great liked the place so much she decided to buy it. Naturally, it was an offer Cantemir couldn’t refuse.It’s funny that right after Catherine bought the new estate, all of the Russian nobility suddenly fell in love with the place as well. Ahh, I guess some things never change…Naturally, Catherine couldn’t have a palace in an area called „Black Mud”, so it was renamed to „Tsaritsyno” which means „Tsarina’s”. She spent quite a lot of time there, and a small, temporary palace was built there for her.However, it couldn’t last like that forever, and court architect Bazhenov was assigned the task of building a real palace complex in the new estate.Bazhenov was supposed to design everything in a pseudo-Gothic style that was popular back then. Since no one really knew how it was supposed to look, he let his imagination run wild, combining Gothic style with Moscow architecture of red bricks and white stone, plus a lot of other things. He was supposed to build plenty of buildings and make sure they fit the landscape perfectly.www.moscow-russia-insiders-guide.com/Tsaritsino park aerial - Парк Царицыно с квадрокоптера 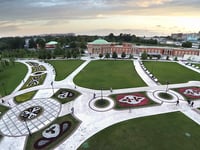 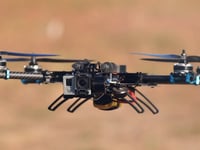