Twin Lights Highlands NJ/Highlands, New Jersey/Situated 200 feet above sea level atop the Navesink Highlands, Twin Lights has stood as a sentinel over the treacherous coastal waters of northern New Jersey since 1828. Named Navesink Lightstation, it became known as the "Twin Lights of Highlands" to those who used its mighty beacons to navigate. As the primary seacoast light for The Highlands, New York Harbor, it was the best and brightest light in North America for generations of seafarers. Many a life and cargo were saved by the sweep of its light.The current lighthouse, built in 1862 of local brownstone at a cost of $74,000, replaced the earlier buildings that had fallen into disrepair. Architect Joseph Lederle designed the new lighthouse with two non-identical towers linked by keepers' quarters and storage rooms. This unique design made it easy to distinguish Twin Lights from other nearby lighthouses. At night, the two beacons, one flashing and the other fixed, provided another distinguishing characteristic.The Twin Lights are under the New Jersey Department of Environmental Protection, Parks and Forestry DIvision and managed by the Twin Lights Historical Society, a friends' group who preserve and protect the culture and history of the site. 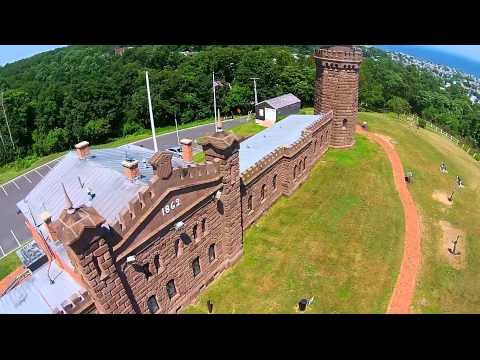