Coalhouse Fort, Thurrock.Princess Margaret Road, Tilbury, Thurrock, United Kingdom.The Coalhouse Fort Project was set up in 1983 by a dedicated team of volunteers. Leased from Thurrock Council, with the aim of restoring the fort. The Fort is set within several acres of Green Flag parkland next to the River Thames and is currently undergoing refurbishment.Constructed between 1861 and 1874, the Fort cost an estimated £130,000 and was built to defend the Thames from a potential invasion by France. Forts were also built on the opposite side of the Thames in Kent, at Cliffe and Shorenmead.Coalhouse served as a coastal defence battery during WW1 and WW2.. During WW2 it became a Degausing Monitor Station to help protect shipping from magnetic mines that were being deployed in the Thames estuary. It was closed following the abolition of Coastal Defence in 1956 and used as storage for Bata shoes until the early 1960's.Strategically placed on the Essex peninsular, Coalhouse Point, this unique site has been developed as a defensive position from 1402. With a near 180 degree arc of fire across the bend in the River Thames at Stanford-le-Hope and back towards London this location was chosen as earthwork defences, Henrician blockhouse and the Victorian Coastal Defence fortress which stands today.Lord Palmerston, Prime Minister twice during the 19th century, helped promote the idea of a defensive wall around the British Isles to protect from the perceived European threat. These fortresses have come to be known as Palmerston's Follies as none of them fired a shot in anger until World War II. Many felt they were a waste of money (Coalhouse Fort, for example, cost around £130,000 to build), but in hindsight they could have worked from a deterrent point of view.The fort which stands today has undergone many changes since its Victorian footprint. Originally, the fort was a Haxo Casemate design where it housed 11 Rifle Muzzle Loaders (RML's) in its 22 casemates plus three larger RML's in open batteries. Later, Quick-Firing (QF) guns were added to the roof and, during WWII, two 5.5" guns from HMS Hood were deployed along with an Anti-Aircraft (AA) gun - the only weapon to fire in anger at the approaching Luftwaffe during the Blitz. Aerial View of Coalhouse Fort to Coalhouse Point along the Thames Estuary Path for the Two Forts Way and Walls and Gardens app. www.coalhousefort.co.uk 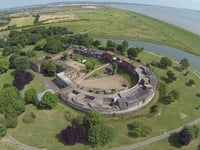 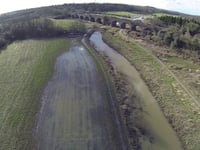 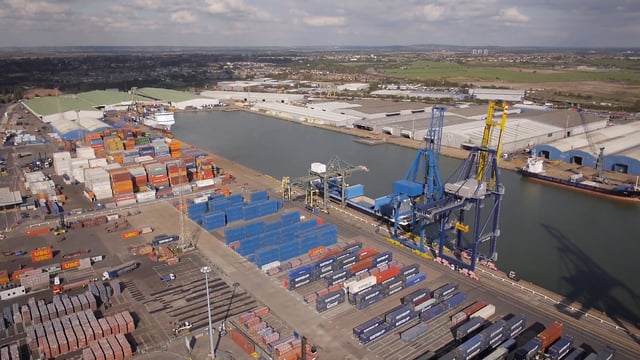