Herodyon National Park Herodion National Park.- by Amir Aloni Arabian Peninsula Herodium, located south of Jerusalem and east of Bethlehem, on the edge of the Judean Desert, is one of the most fascinating antiquities sites in the country, it was built by King Herod the Great between 23 and 15 BCE, as a combined palace and powerful fortress. The complex was surrounded by a double wall 63 meters in diameter and seven stories high, within which Herod built a palace that included halls, courtyards and opulent bathhouses. Earth was heaped up around the walls, which created a cone-shaped artificial mountain. At its foot, Herod built a kind of royal ‘country club,’ including a large pool, a bathhouse and a roofed pool. Despite its desert location, the complex was surrounded by magnificent gardens irrigated by the pool. A special aqueduct from the area of Solomon’s Pools near Bethlehem brought water to the palace. The importance of Herodium to the king is clear from the fact that it is the only place he constructed to which he gave his name. The discovery of Herod’s magnificent tomb there after long years of searching strengthens the understanding that the Judean “builder-king” had a special attachment to this site. Its special charm is also revealed in the breathtaking view from the top, which takes in Jerusalem, Bethlehem and the unspoiled Judean Desert. During the Great Revolt of the Jews against the Romans the rebels had a base at Herodium, constructing a synagogue there that can still be seen. During the Bar Kokhba Revolt, Jewish fighters hewed tunnels within the artificial mountain, part of which are lit and accessible to visitors. 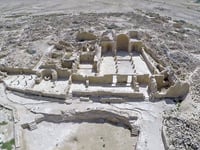 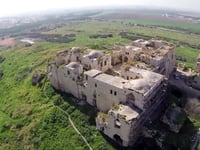 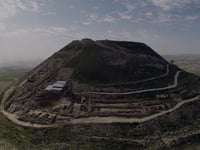