Budapest Citadella aerial video with DJI Phantom + Tarot 2D Gimbal + Gopro 3 BE. Citadella is the Hungarian word for Citadel, a kind of fortress. The word Citadella is exclusively used by other languages to address the Citadel located upon the top of the strategic Gellért Hill in Budapest, Hungary.The fortress was built in 1851 by Julius Jacob von Haynau, a commander of the Habsburg Monarchy, and designed by Emmanuel Zitta and Ferenc Kasselik, after the Hungarian Revolution of 1848. It occupies almost the entire 235 metres high plateau. The fortress is a U-shaped structure built about a central courtyard, being 220 metres long, 60 metres wide, and 4 metres tall. It had a complement of sixty cannons.Actually built by Hungarian forced labourers, it was finished in 1854. In June 1854 Austrian troops settled in the citadel. After the Austro-Hungarian Compromise of 1867 and the establishment of Austria–Hungary, the Hungarians demanded the destruction of the Citadel, but the garrison troops left only in 1897, when the main gate was symbolically damaged. It was not until late 1899 when the city took possession of the Citadel. A few months later, in 1900, the walls were demolished.In the Hungarian Revolution of 1956, Soviet troops occupied the Citadella. Tanks fired down into the city during the assault that overthrew the Nagy-led Hungarian government. Budapest Citadella - the best aerial videos 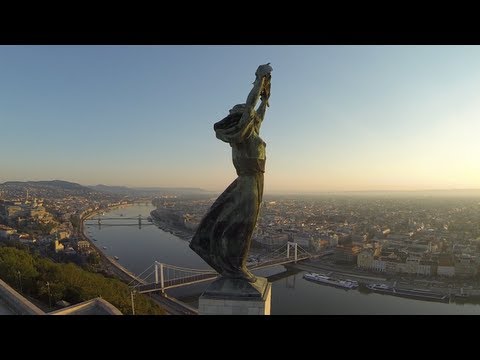