Osborne Isle of Wight Osborne, Isle of Wight, United Kingdom. Osborne House is on the Isle of Wight and became Queen Victoria's country getaway in the mid 1800s. They rebuilt Osborne House to create a family palace of extreme opulence with extravagant interiors as demonstrated in the Durbar room. As you wander through this palace you get a real glimpse into what royal family life was like 200 years ago.Lots for children to do, including the Swiss Cottage which has child size furniture and was built to encourage children to learn domestic skills. They can also have fun in the play area or enjoy a horse and carriage ride.There are beautiful gardens to explore and admire and also a restaurant,café and gift shop.Read more www.tourist-information-uk.com "It is impossible to imagine a prettier spot" were the words of Queen Victoria after her first visit to Osborne on the Isle of Wight. Our short film reveals the spectacular setting of this royal seaside palace where Britain's longest reigning monarch, Queen Victoria, lived with her beloved Prince Albert and their nine children. Although famous for the magnificent Royal Apartments with their sumptuous drawing and dining rooms and the richly decorated Indian-inspired Durbar Room within the house, Osborne's extensive gardens and grounds include terraces, walled-garden a private beach - complete with the Queen's bathing machine, and Swiss Cottage where the royal children played. English Heritage now cares for Osborne today, and as we filmed at the start and at the end of a summer day, all that's missing from the video is you, your family and friends! 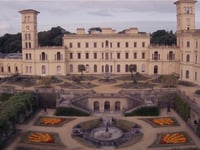