Muiderslot Muiden Netherlands Herengracht, Muiden, Netherlands The most beautiful and best kept medieval castle of Holland is only 15 minutes away from Amsterdam: castle Muiderslot. Built by Floris V in 1285 and in the Golden Age the official residence of P.C. Hooft, the Dutch Shakespeare. A tour through the refurbished 17th century museum rooms is included. Beautiful historic gardens and a unique location along the water. Situated just 15 kilometers south of Amsterdam and along the river Vecht sits Muiderslot castle. This well-known castle is located in the town of Muiden and was built in 1370 by Albrecht, the Duke of Bavaria. Muiderslot is now included in the UNESCO World Heritage List and has been featured in a number of television shows set in the Medieval era. Today, the castle is used as a national museum and is open to the public.In 1280, Count Floris V built a stone castle along the mouth of the Vecht river after assuming control over the nearby area. At the time, the river was the trade route to the town of Utrecht and was an essential trade town in the Netherlands. With walls as thick as 1.5 meters and only measuring 32 by 35 meters, Muiderslot is a fairly small castle. The moat that surrounded the castle, however, provided extra protection.In 1296, a group of men conspired together to kidnap the count and he would eventually become imprisoned in the castle. After an attempted escape, the count was stabbed 20 times and killed. Just one year after the count’s death, the castle was taken over by the Archbishop of Utrecht and Willem van Mechelen. By the time 1300 came around, the castle had been completely destroyed. One hundred years later, the castle was finally rebuilt in the same location and based on the same plans as the original structure. The new Muiderslot was built by Albert I, Duke of Bavaria. By the end of the 18th century, the castle was being used as a prison before becoming completely abandoned. After falling into ruin, the castle was put up for sale with the intention of demolishing the structure. King William I intervened and prevented the destruction of Muiderslot. It would be another 70 years before enough money was collected to restore the castle. www.netherlands-tourism.com Shoot the castle Muiderslot, Netherlands. Uses my DJI Phantom 2 Vision plus 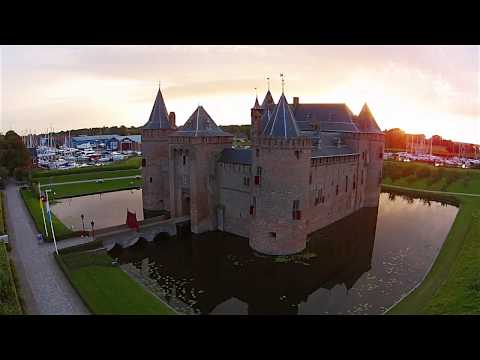